Another story that didn’t get told during the time of drought and violence was the Lion group’s trip to Lake Turkana.

Lake Turkana is the world’s largest desert lake, it is also the largest alkaline lake and has recently become home to Africa’s largest wind farm. The shores of Lake Turkana have evidence of some of the earliest humans, this is the cradle of mankind. It is part of the African Rift Valley and has active volcanic cones that steam quietly, contemplating future eruptions. The lake sits in a desert of black volcanic rock, harsh and inhospitable, yet people still live here in ways little changed from the earliest of times. It is a remarkable place.

This trip would be too short to see all there was to see but we would visit the new wind farm and the children, living for the previous three years in severe drought, would see a large body of water for the first time in their lives.

It was the first time the children had taken a trip of this kind and was the furthest they had ever been from home. Though it only took us 2 days to get there.

While the boys all piled into the double cab, the girls found themselves a bit of quiet space in the Landcruiser that was carrying most of our kit. 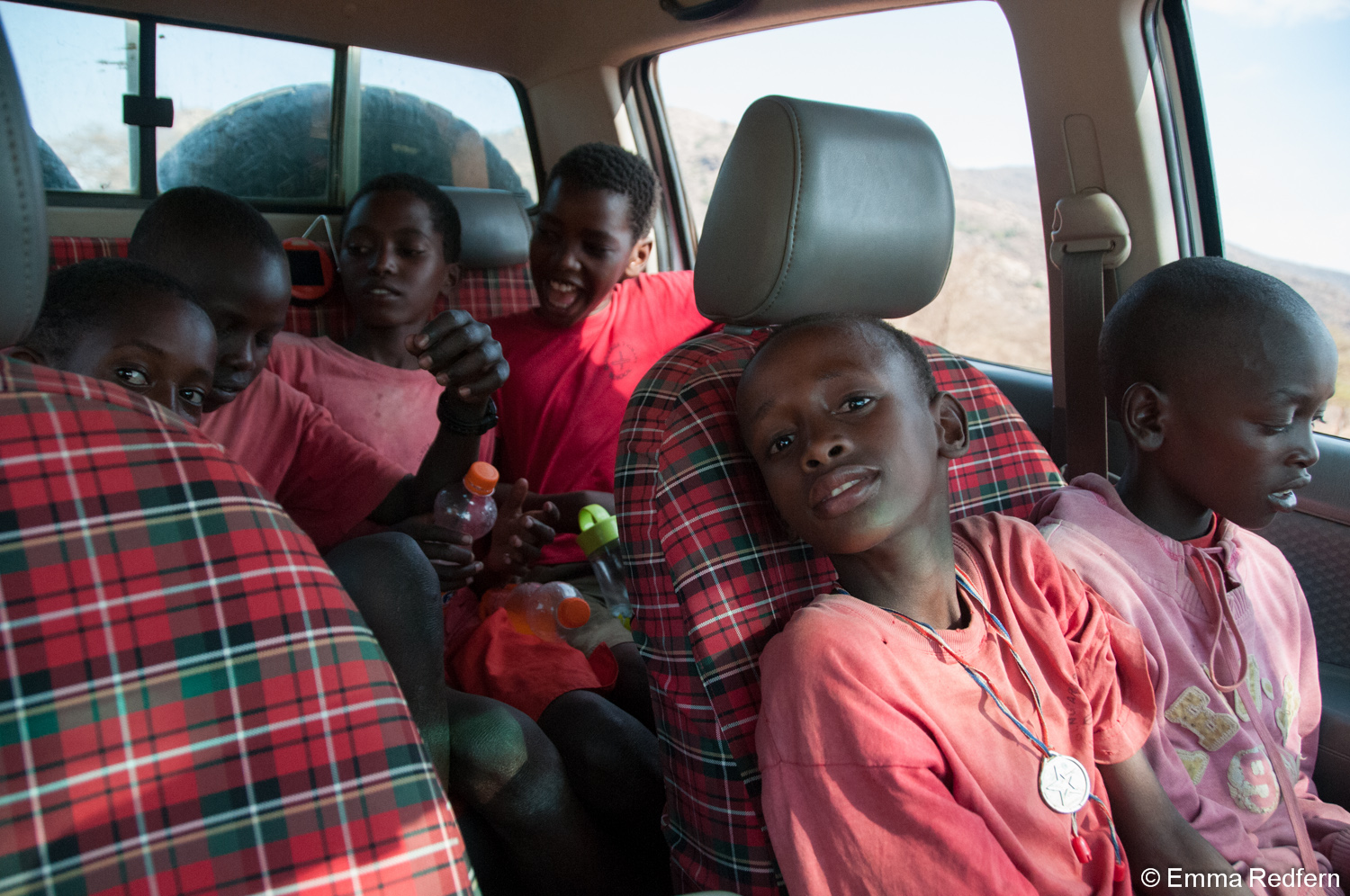 Ready to go to Lake Turkana 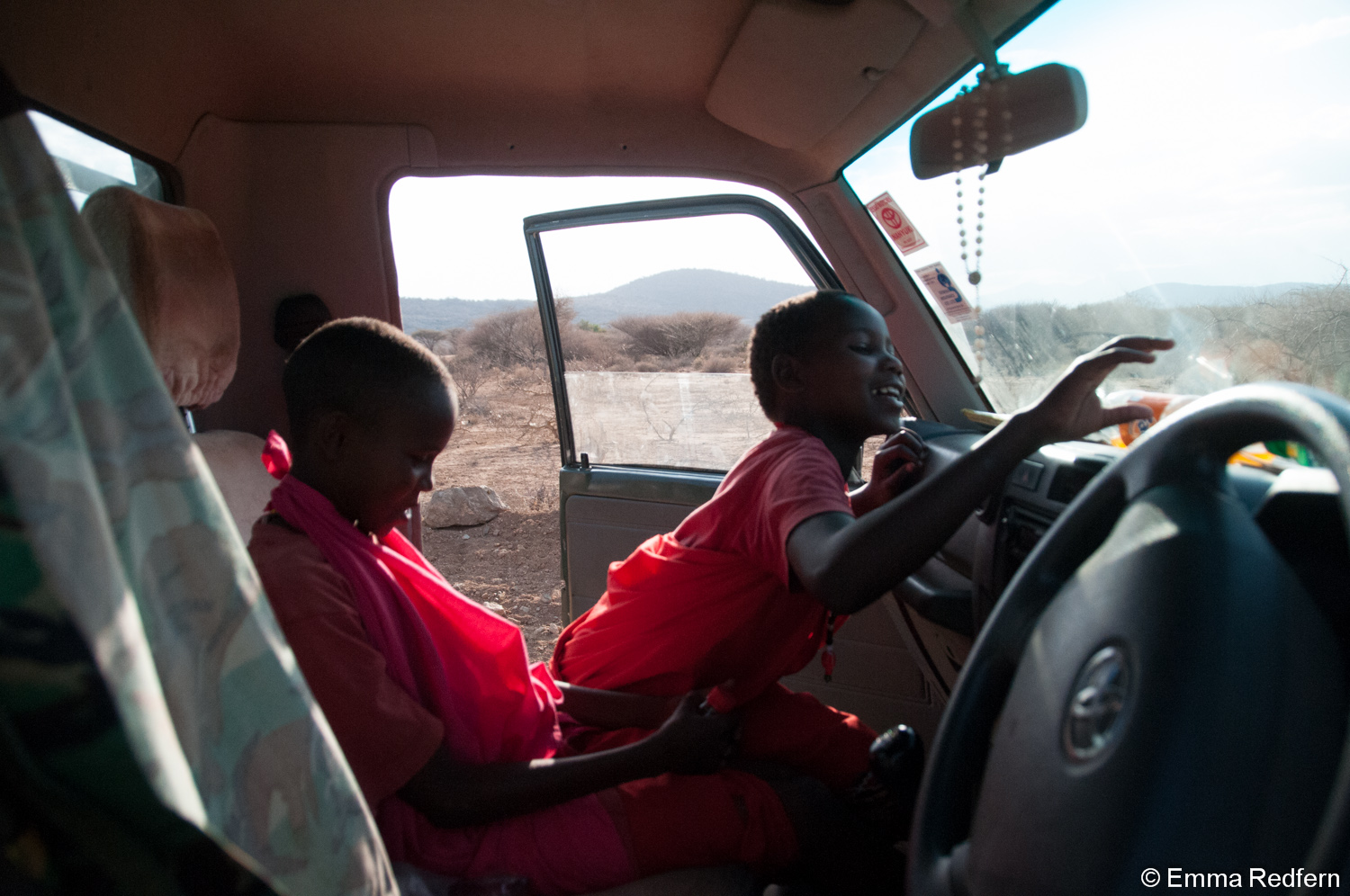 The girls find some quiet space in the Landcruiser

The first leg of our journey to Lake Turkana took us up the amazing new A2 road. This important road connects Ethiopia to Kenya and the rest of East Africa as well as to southern parts of the continent. The smooth new tarmac has cut journey times from days to hours. The road has also helped to open up parts of the north to visitors, if you think you might fancy a trip read my post The Great North Road on the Remember the Goat website. 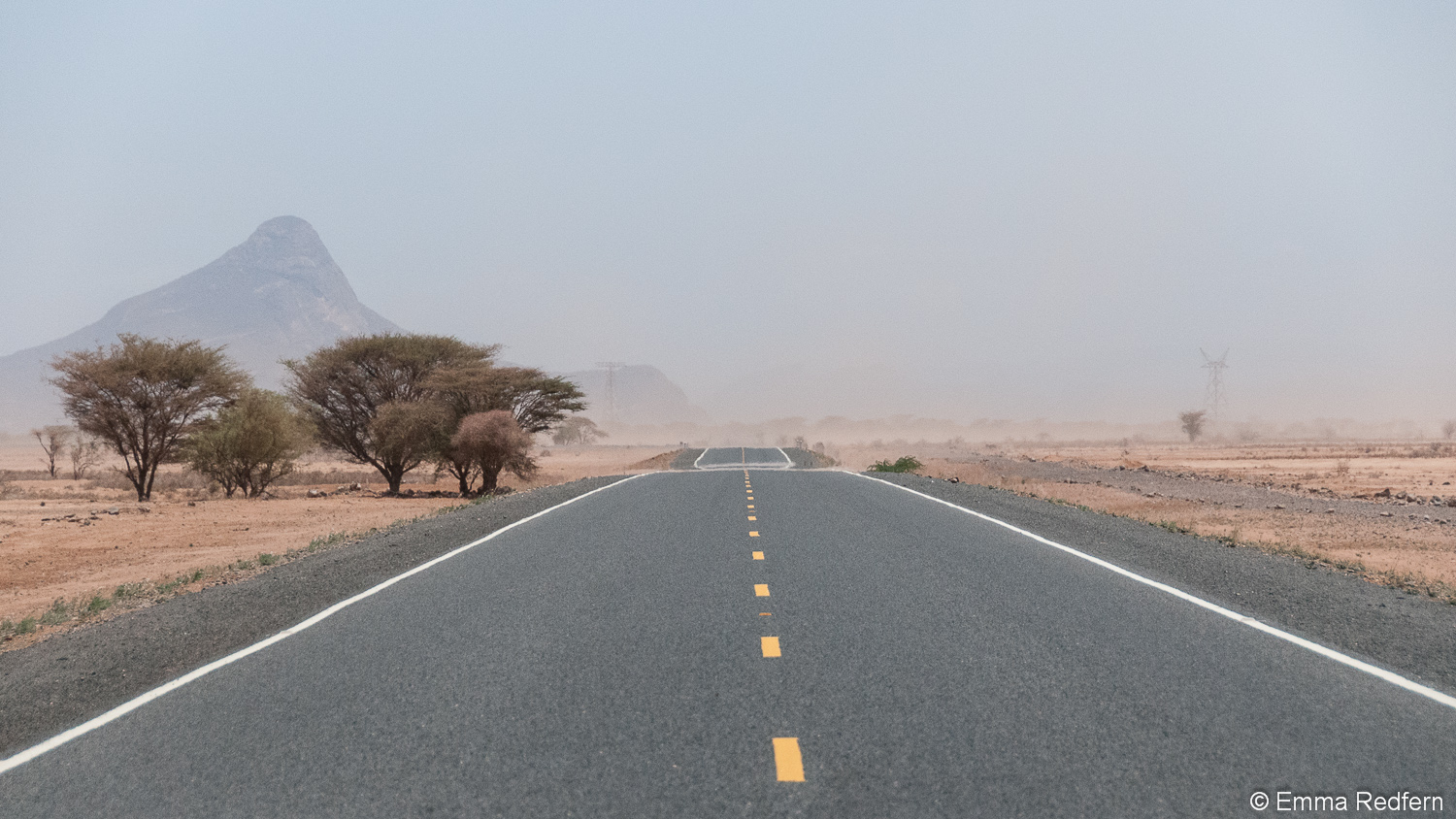 We took this road as far as Laisamis where we turned off onto another good new road. This excellent dirt road was made by the wind farm so that they could get convoys of lorries carrying their huge wind turbines up to the remote shores of Lake Turkana. 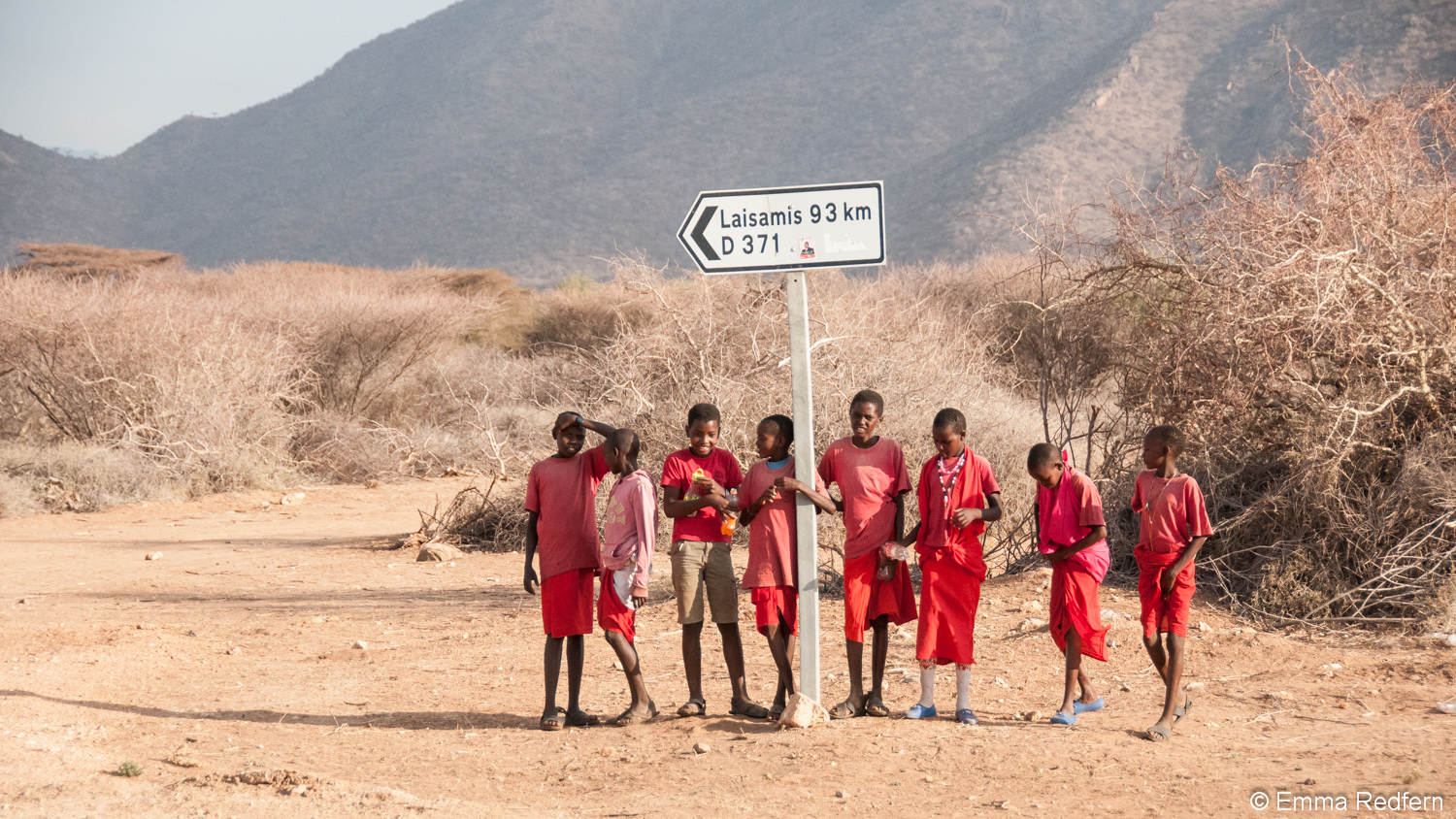 Road signs are rare in northern Kenya, so we really had to have a photo with it. 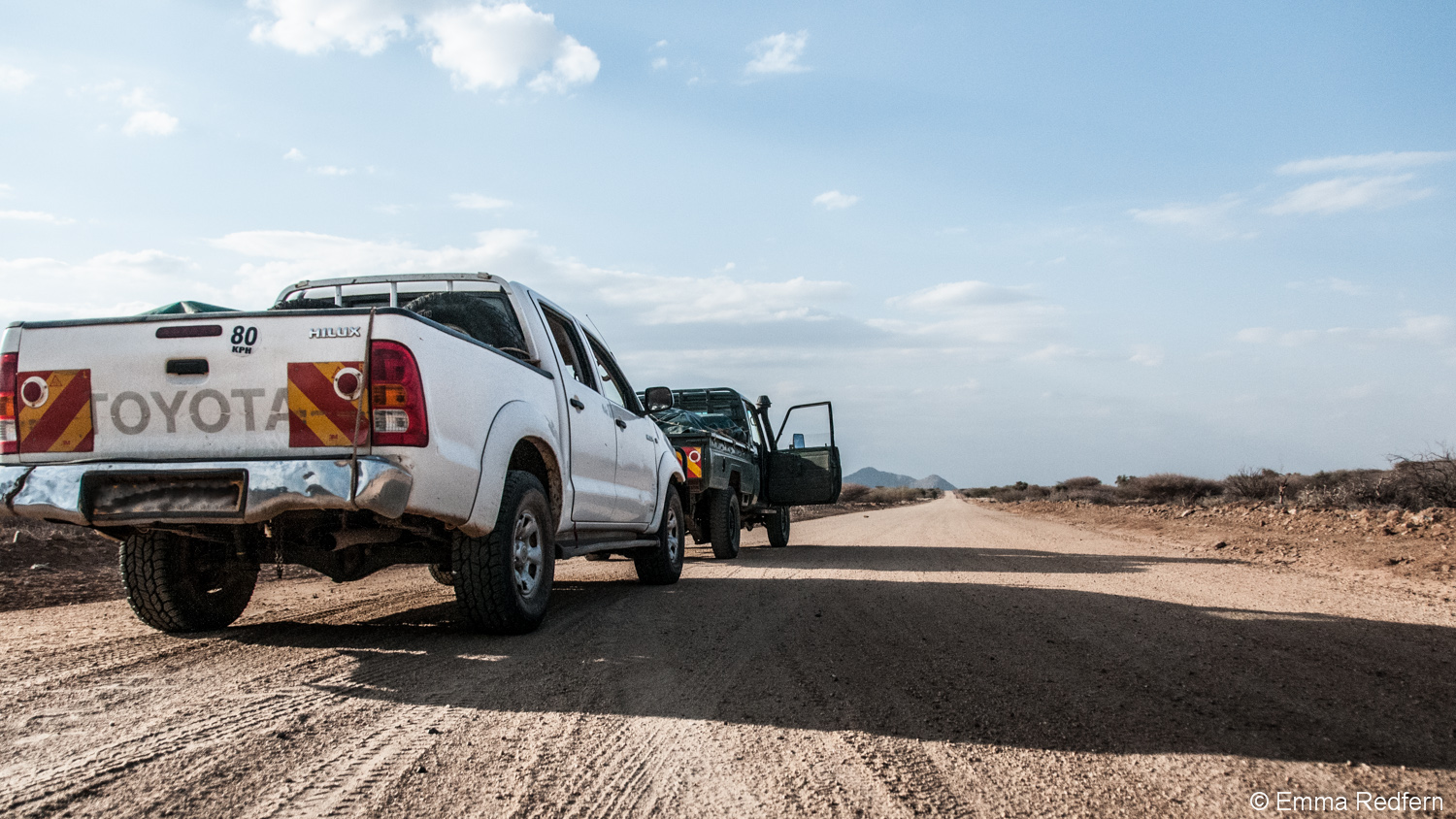 Our transport on the wind farm road

We camped the first night in a dry river bed just to the south of Lake Turkana. Camping is not so different from sleeping out at a cattle camp, but the tents were a new thing for most of the kids. They soon worked out how to put them up and the camp came together in no time. 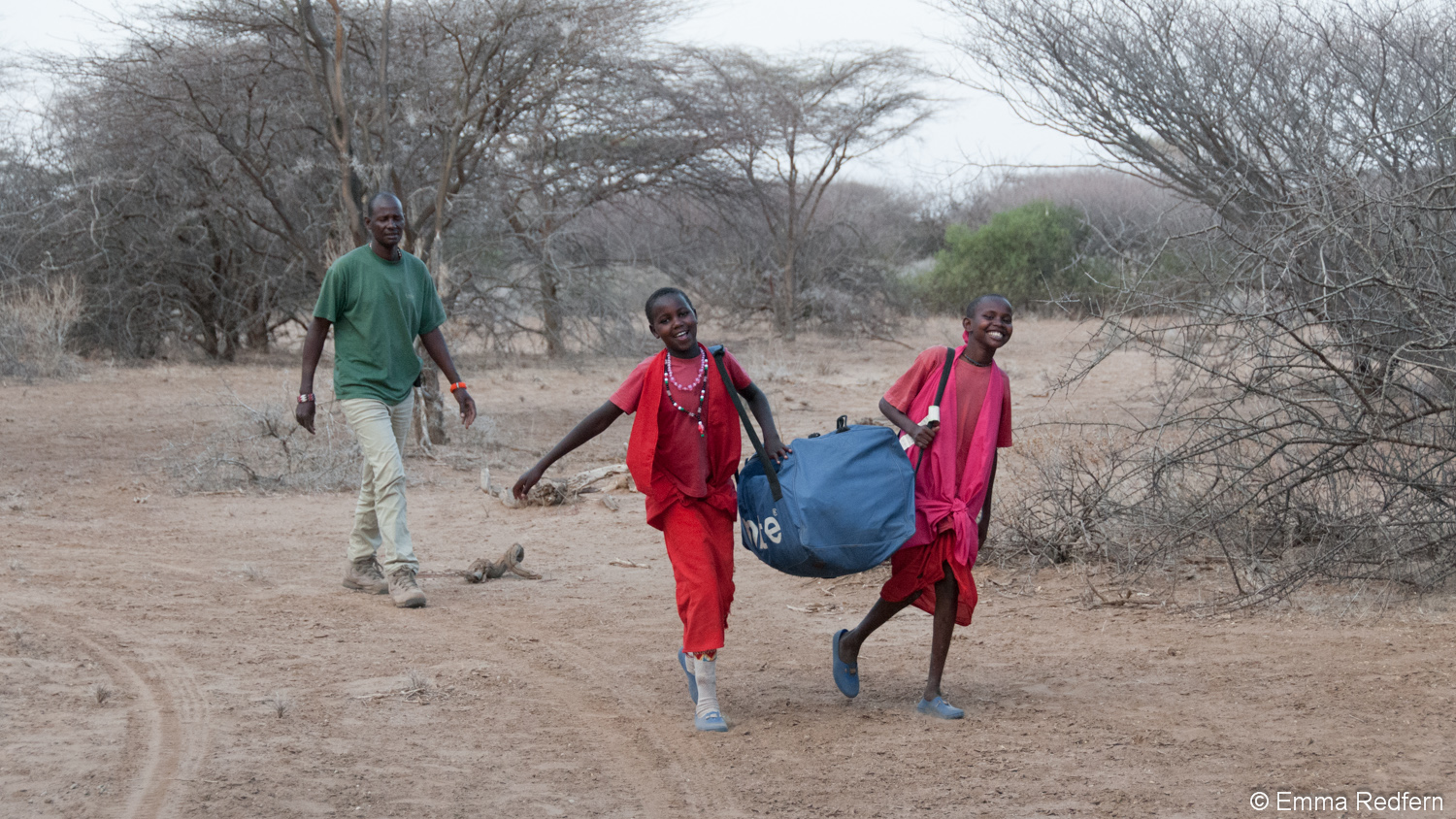 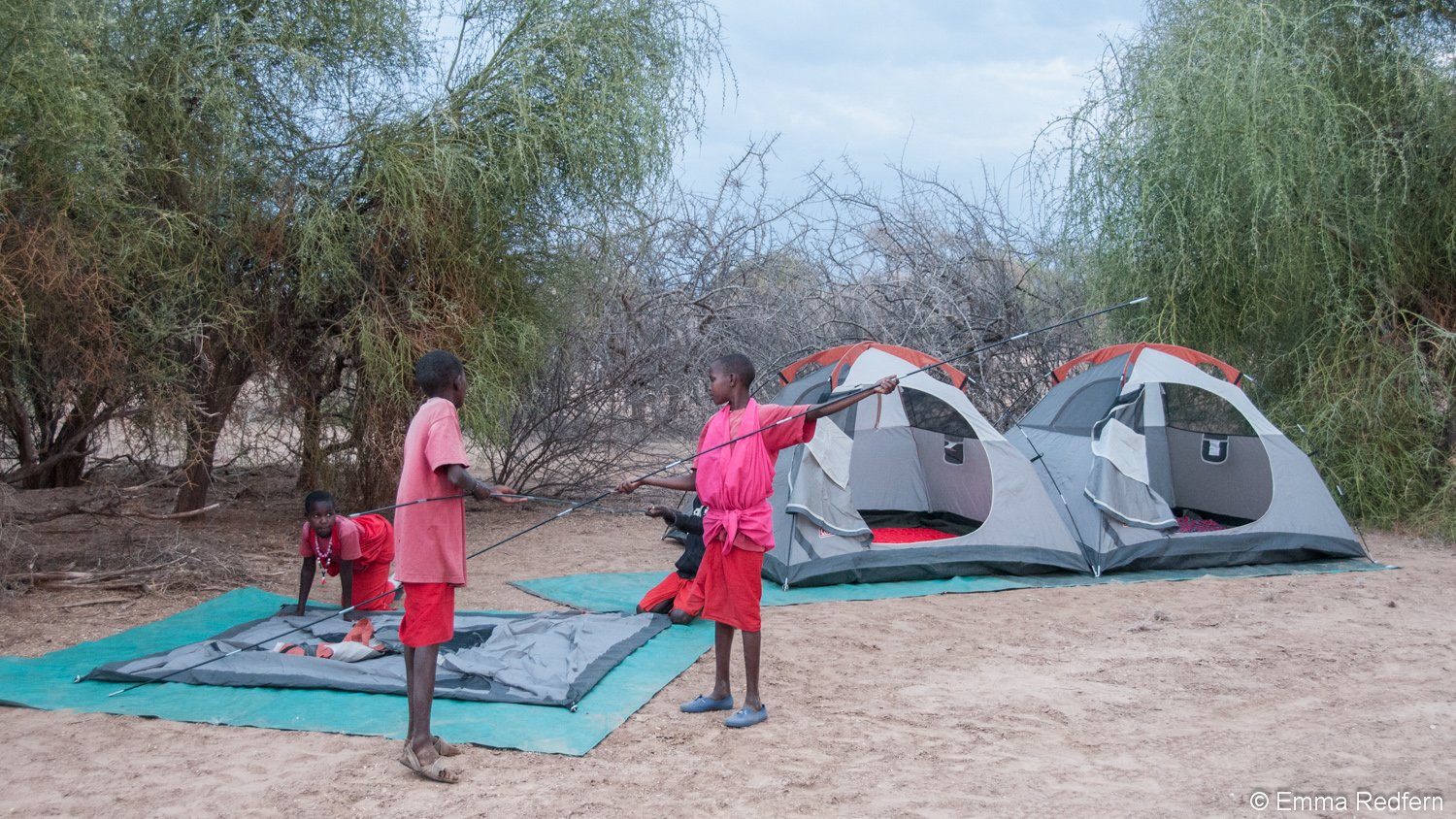 Putting up the tents 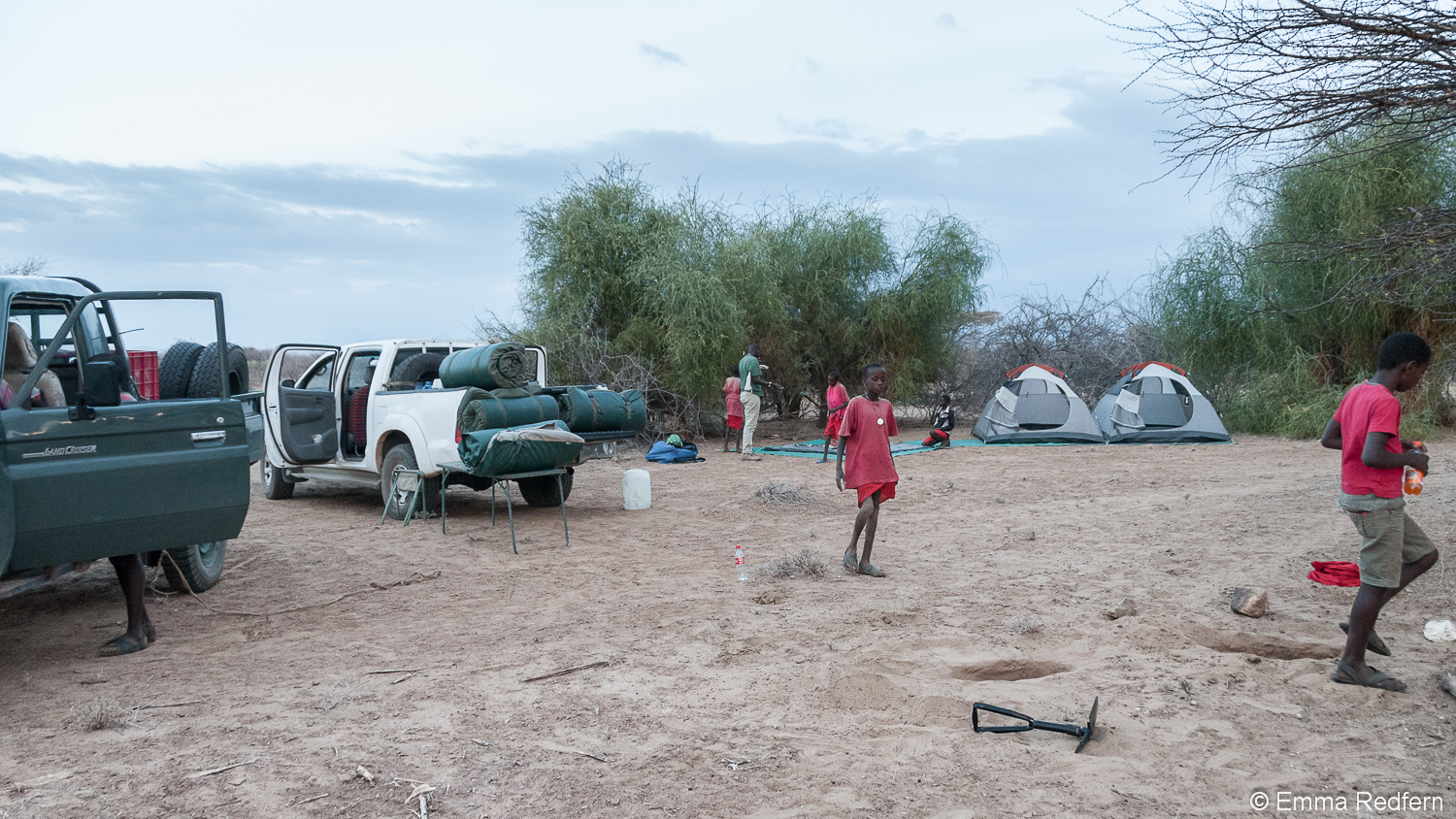 The kids quickly organized a good camp for the night

The next morning we packed up and got ready to go and see Africa’s largest wind farm. 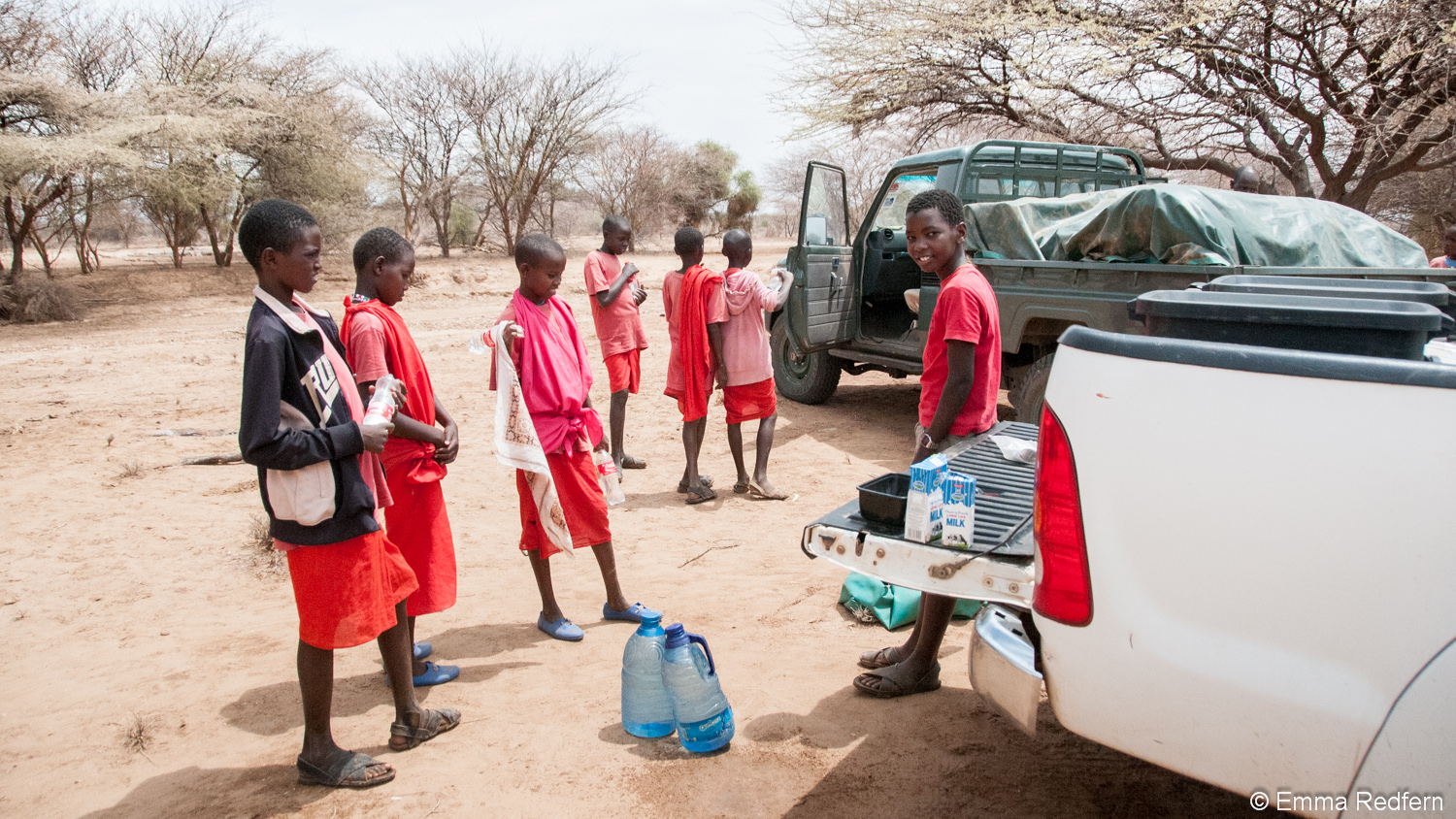 We had discussed the wind farm in class, and talked about green forms of energy, but what does all this mean to children who live in houses with no electricity? For them the scale of the global climate change problem, or the required solutions, is hard to imagine. Seeing the wind farm first hand, the huge wind turbines spreading out in all directions in this impossibly large landscape, did not initially make any of it easier to understand. 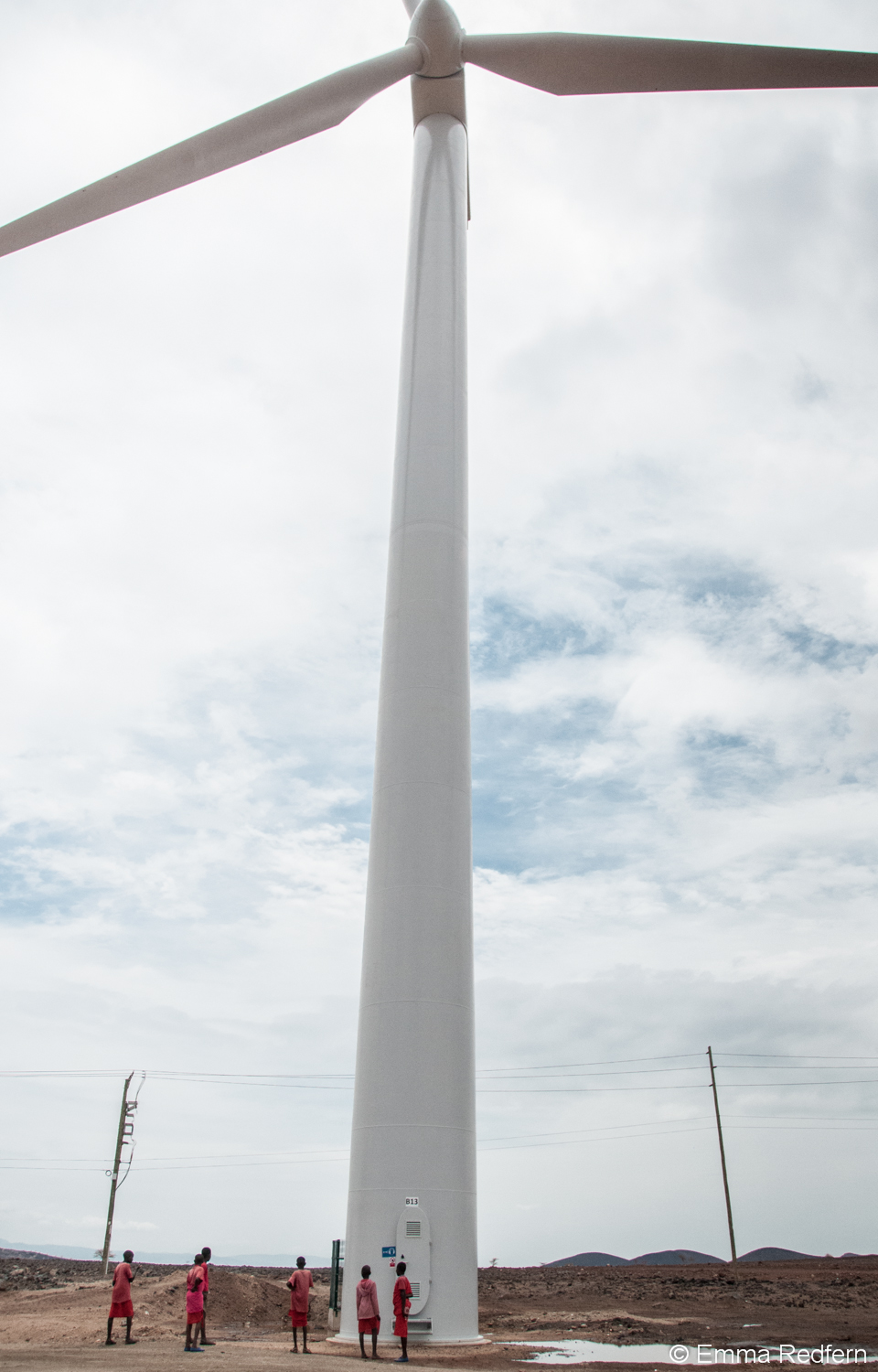 Standing below a wind turbine at Lake Turkana Wind Farm 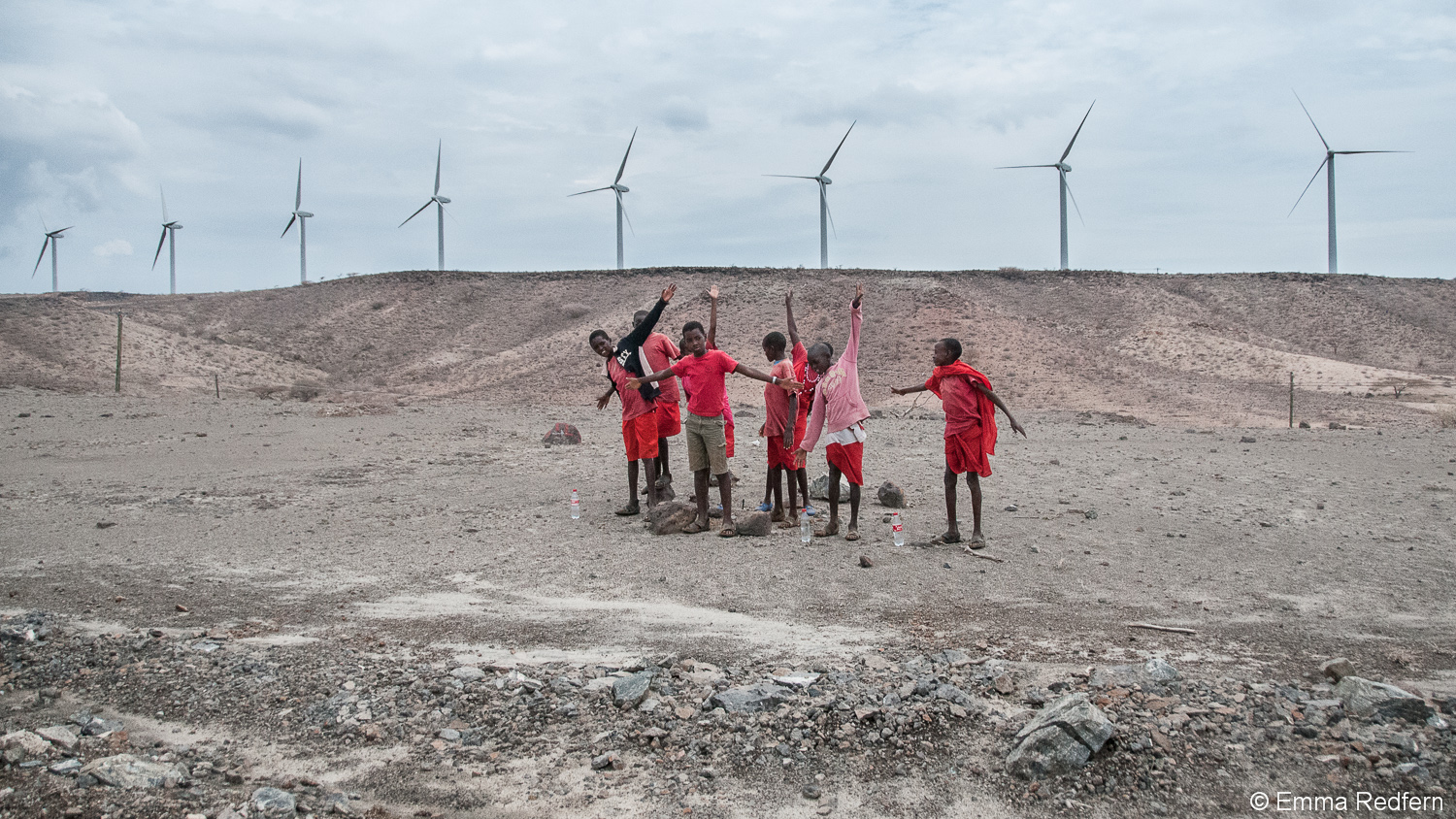 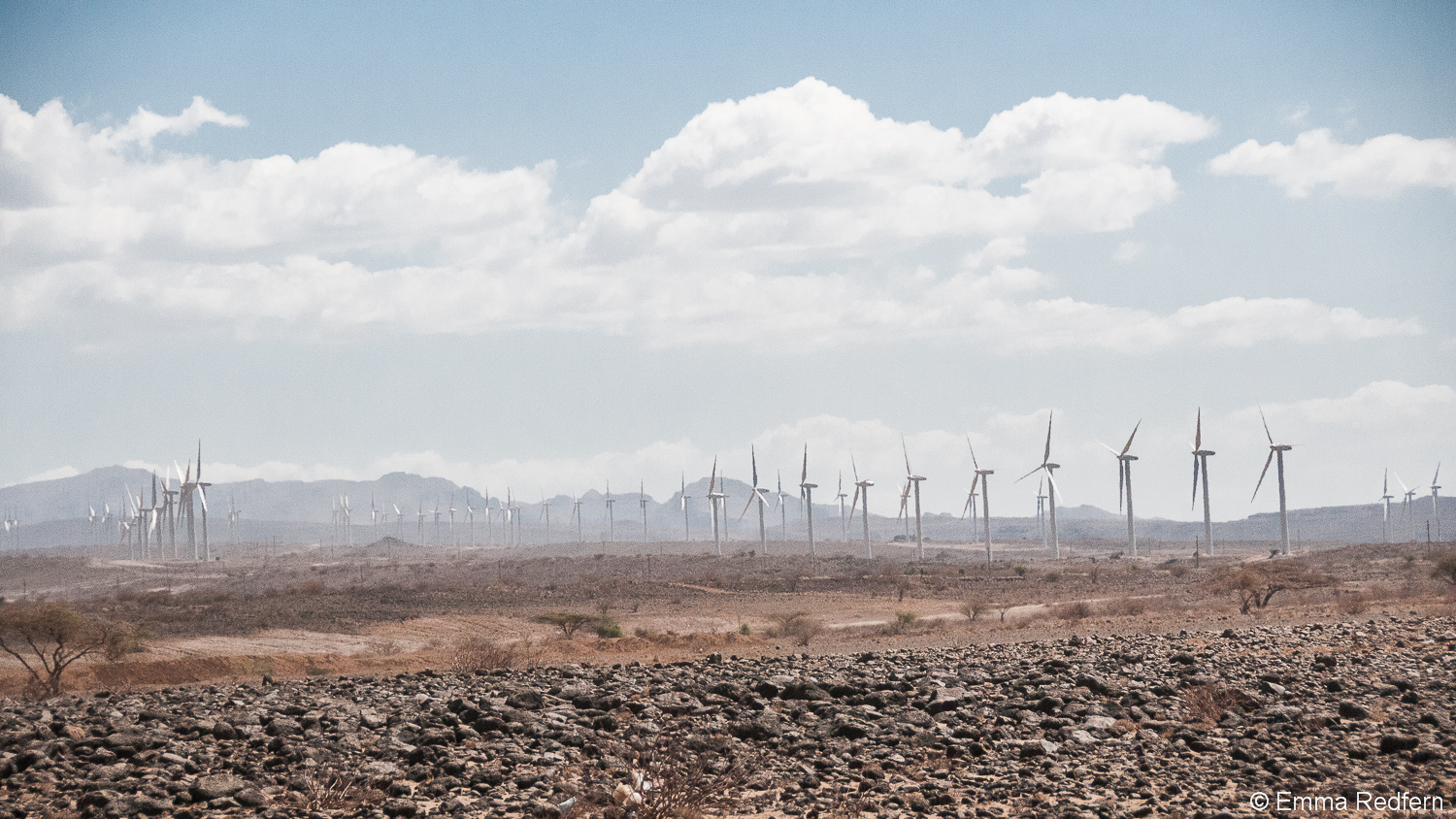 The day of wonderment was not yet over though. Not far past the wind farm the old rock strewn road to Loyangalani crests a rise and the vastness of the worlds largest desert lake spreads out before you. In the mid afternoon haze the children at first didn’t know what they were looking at. I said nothing and waited as first one and then another started to realise that there was something strange about the landscape in front of them. As we began our decent down to the lakeside we stopped to take it all in. 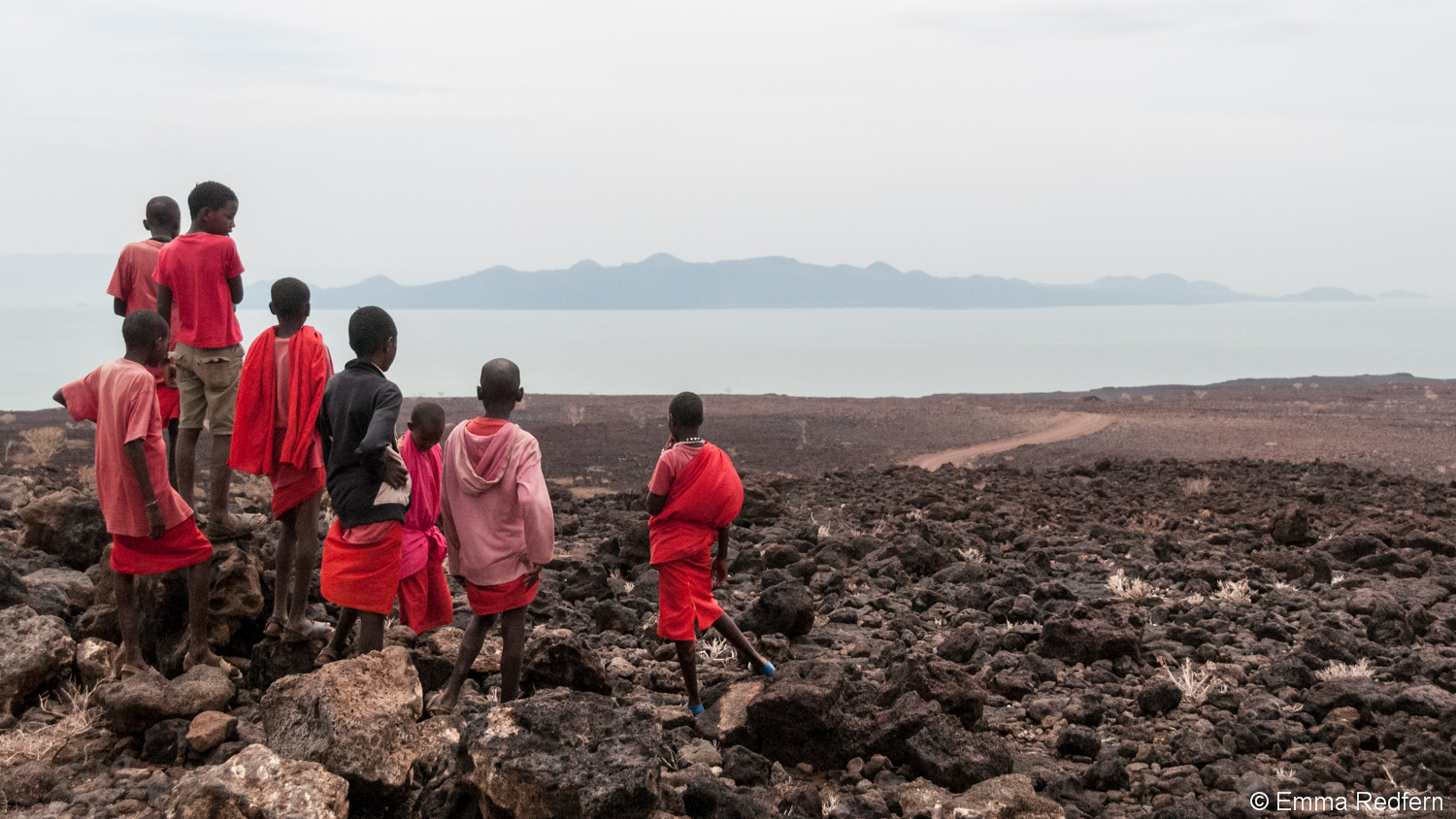 Taking in the first view of Lake Turkana

Twenty minutes of slow careful bumping down the old road and we reached the lake shore. The children were all still strangely quiet. Not sure what to make of so much water, no idea whether it was safe or not, they just looked at it. 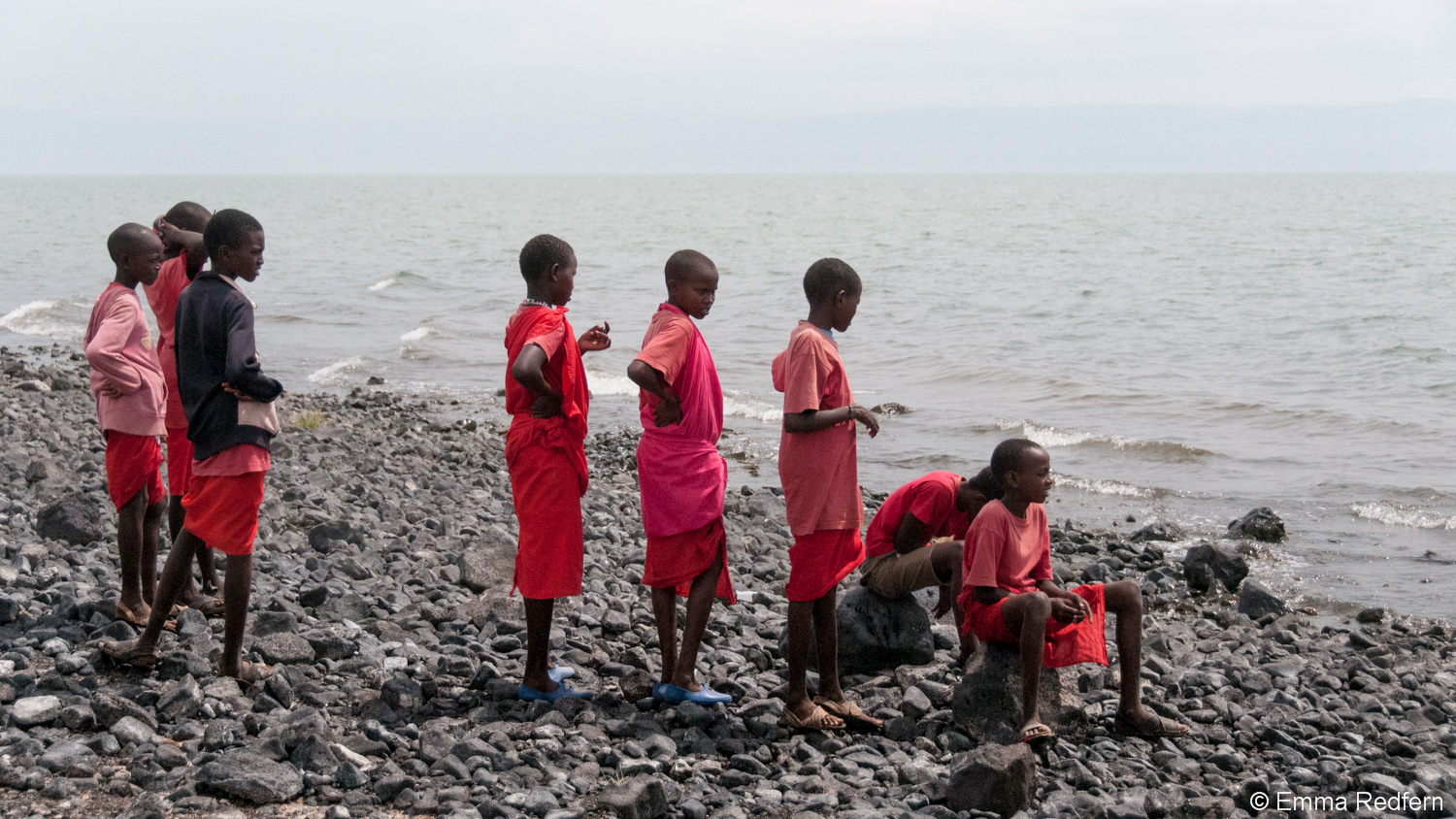 On the shores of Lake Turkana

After assuring them that the water was safe, not suddenly deep, and that none of the famous Lake Turkana crocodiles were around, they were persuaded to get their feet wet. Slowly uncertainty was cast off and noise returned. Lakes are great, waves are mysterious and life is good fun. 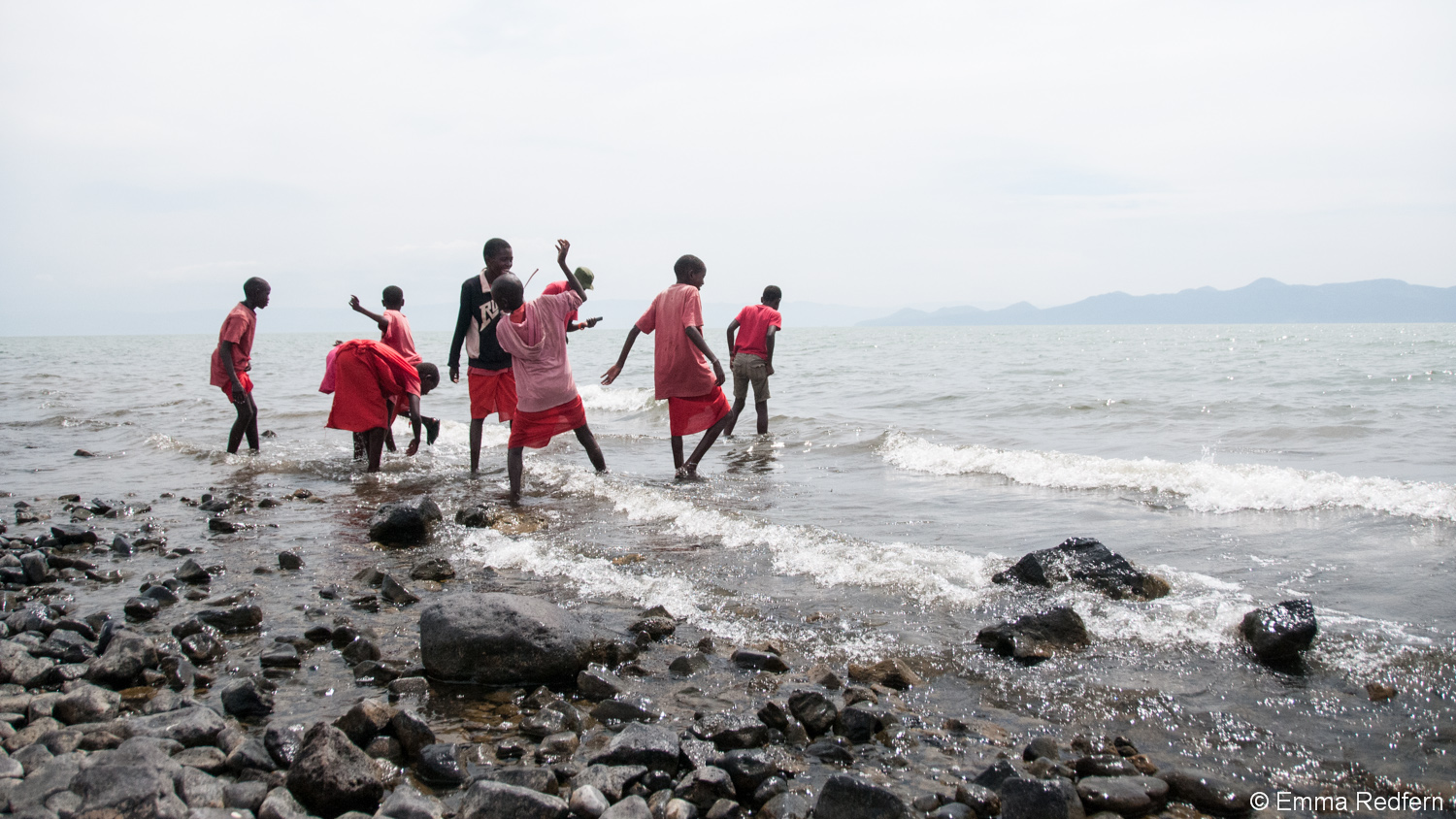 We spent that night in Loyangalani. Loyangalani is the main settlement on the east side of Lake Turkana. It is mostly a collection of traditional homes, fish drying on racks outside. There is however is a small centre to the town with a few shops and, since devolution, some larger administrative buildings have arrived. 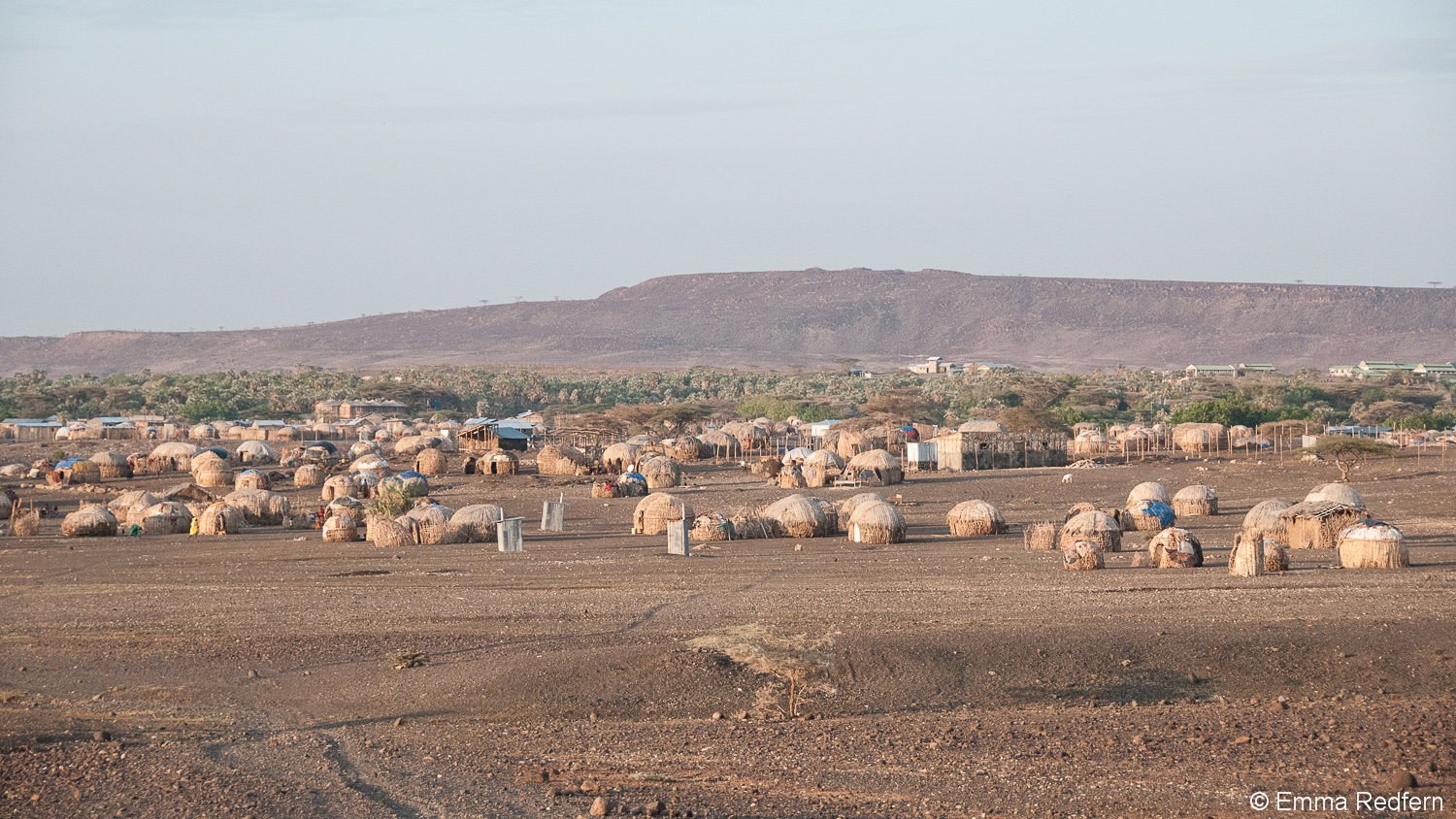 Loyangalani from the road coming into town

That night was another first, the first time the children had stayed in a hotel. As hotels go it was pretty basic but it had ensuite bathrooms (including flush toilets) and beds with sheets and covers. We ate our meals in a dinning room (actually a nice open area enjoying a much needed breeze) and for supper we were served fish.

The next day we visited the Lake Turkana Cultural Centre just outside of Loyangalani. Every year they host the Lake Turkana Cultural Festival here, celebrating the many tribes that live around the lake, El Molo, Rendille, Samburu, Turkana, Dassanach, Ghabra, Borana, Konso, Wata and Burji. For the rest of the time this place is pretty quiet and the caretaker was pleased to open up the small museum for us. 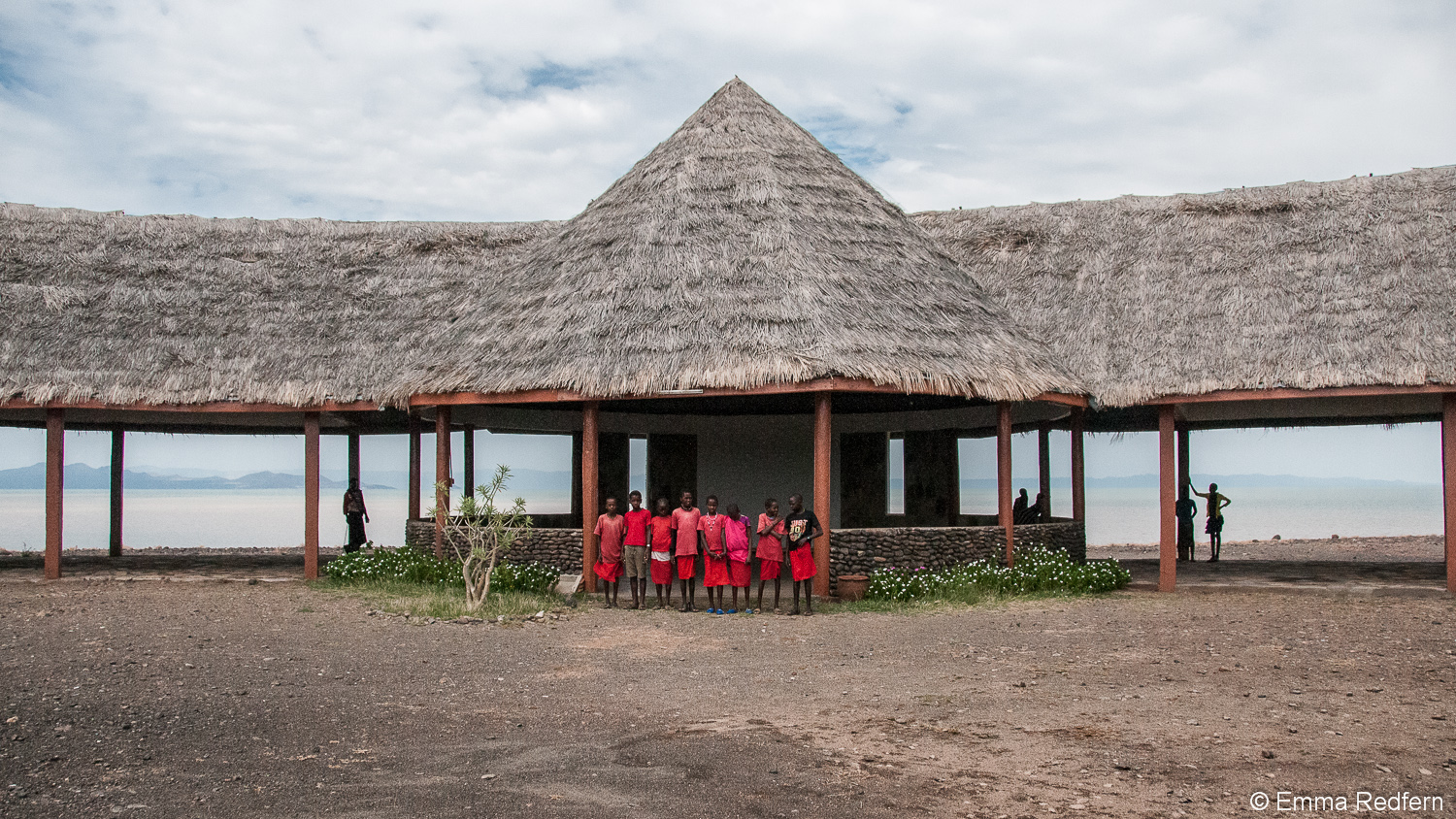 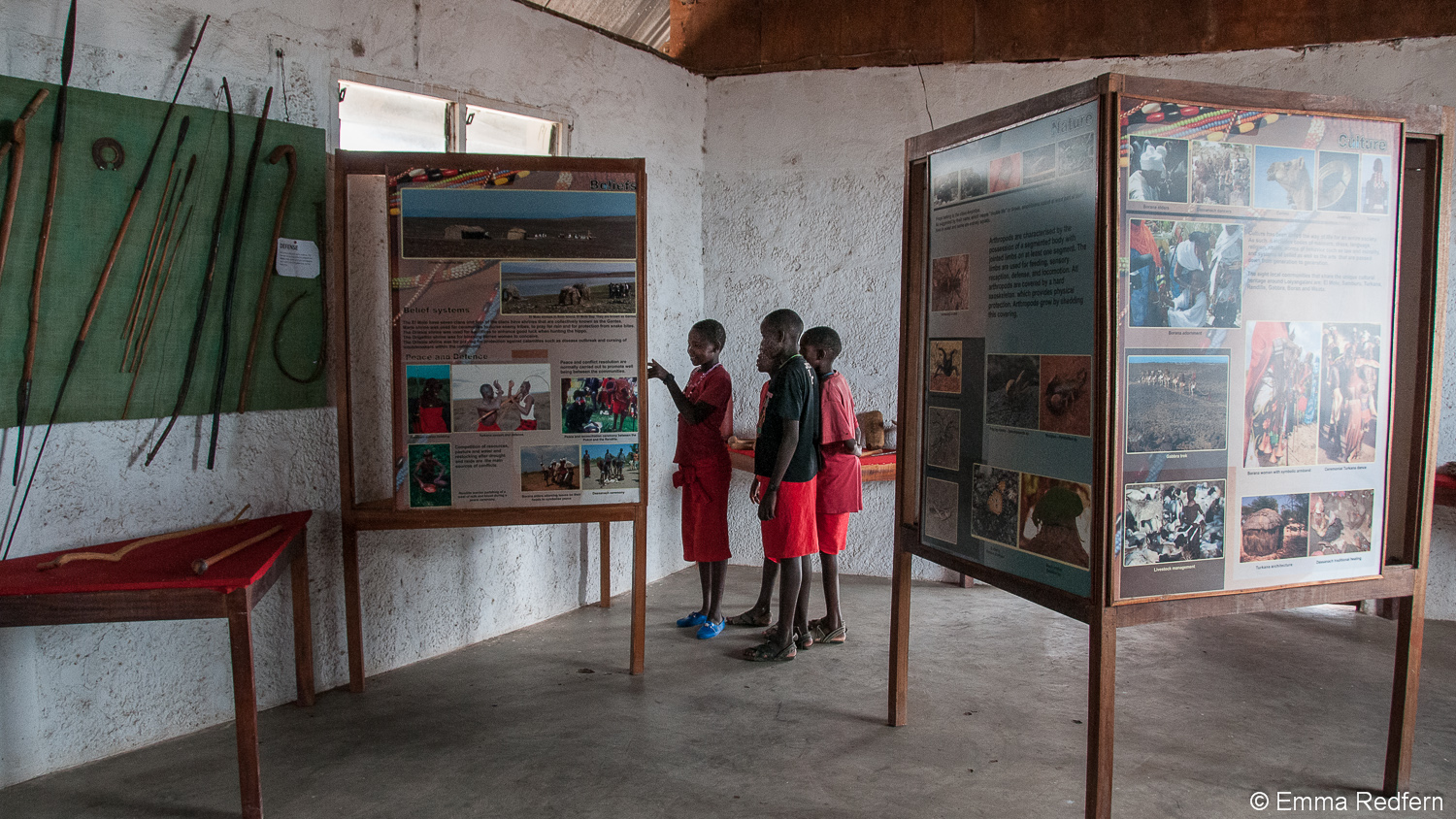 They have a nice collection of traditional items from local tribes, many the children recognized from their own life (and were therefore definitely not history) and other more curious things that were used for fishing or hunting crocodiles. 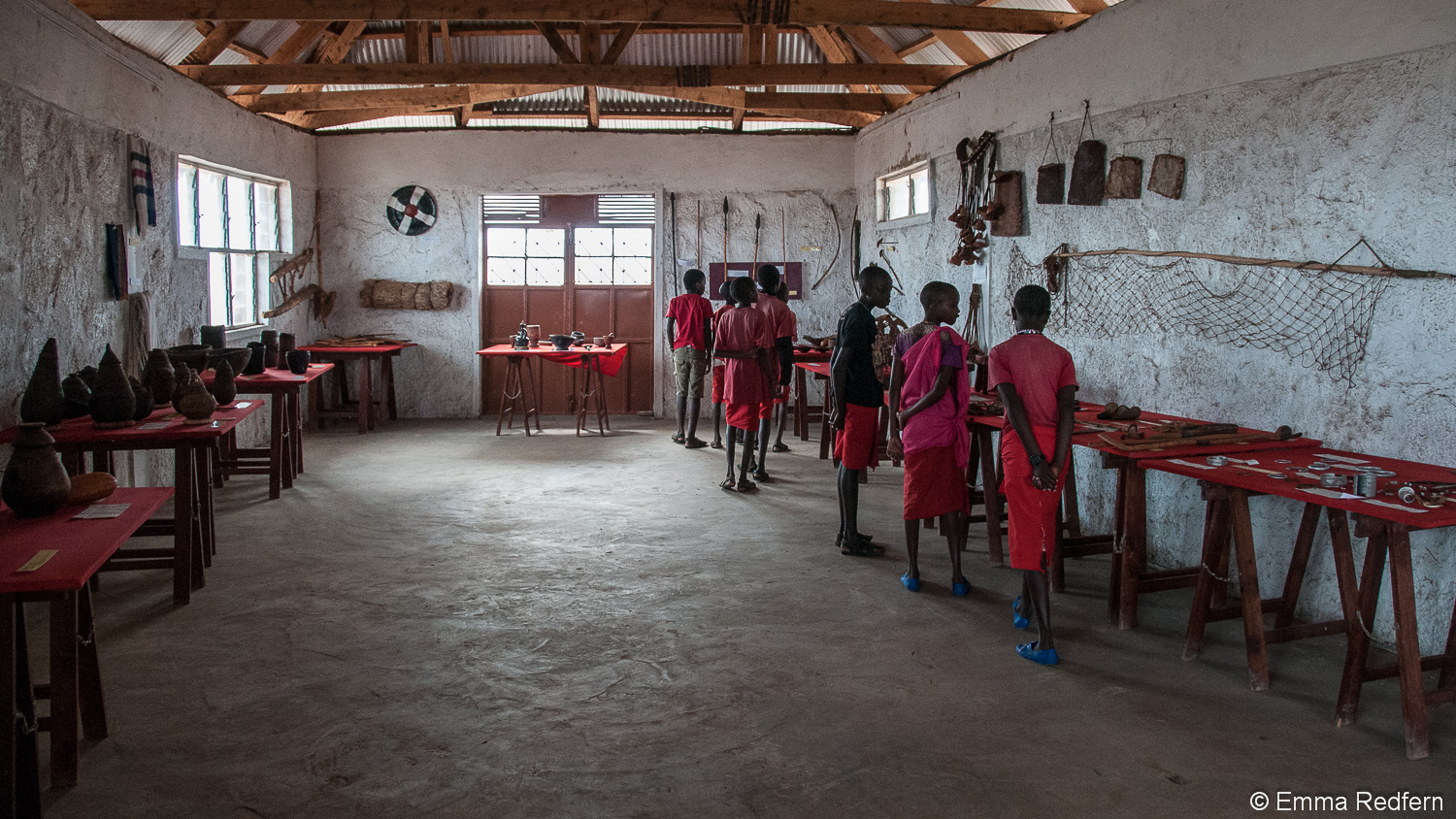 A local man came past and showed the children a fish he had just caught, providing a good opportunity for a brief biology lesson as we examined it’s gills, looked at how it moved and how it used the whiskers around it’s mouth to sense things in the mud. Did we eat one of these last night we wondered. 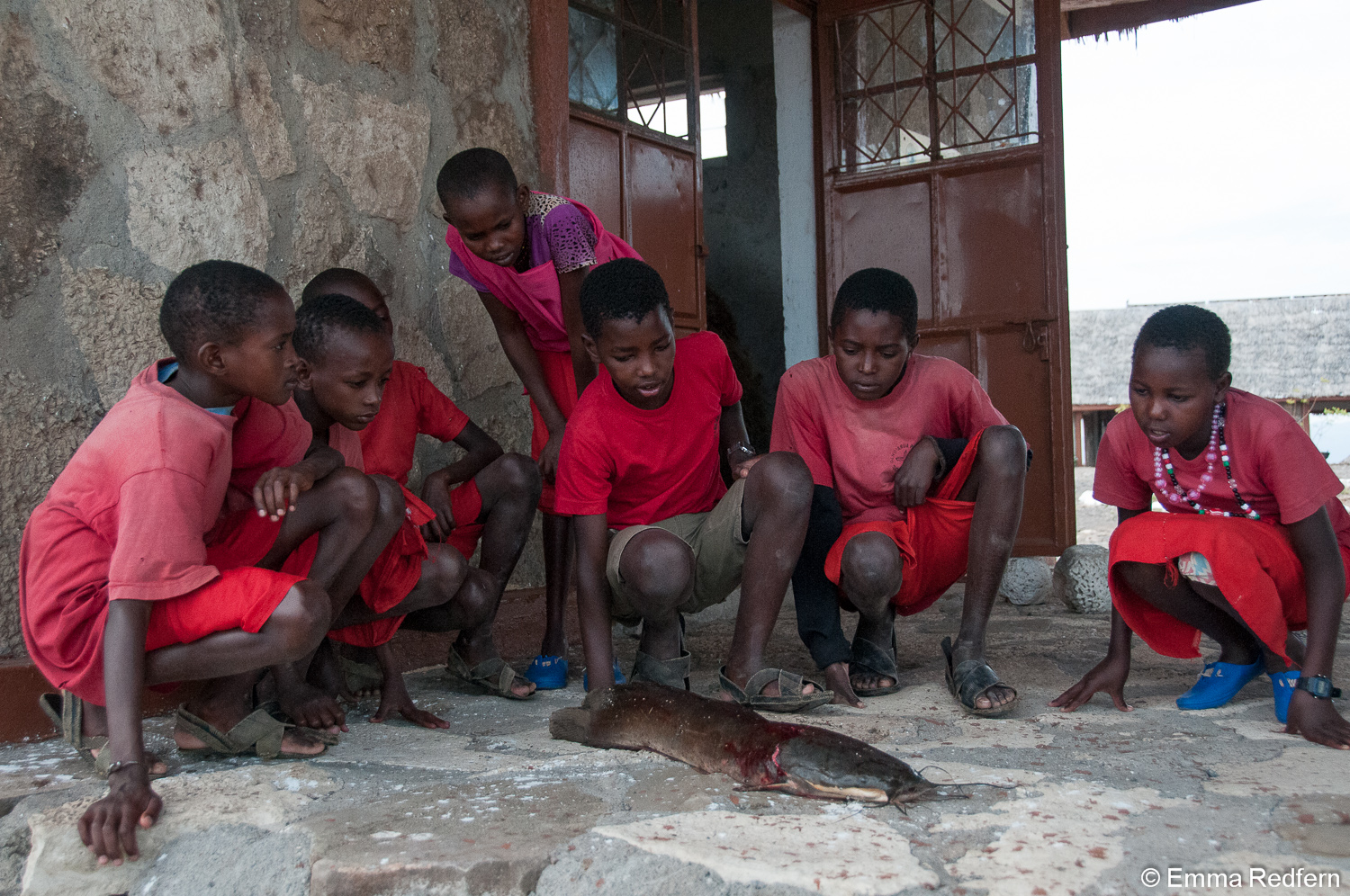 The day would not have been complete without a proper swim in Lake Turkana. As I was the only person present who could actually swim I left the camera behind and struck out towards the distant islands. Everybody else went in as deep as they dared and splashed each other without mercy. We had been advised by the locals that this was a safe place to swim, that the crocodiles preferred the islands off shore. It seemed that rare safe haven was also where the fishermen washed their nets and we all went home smelling rather fishy. 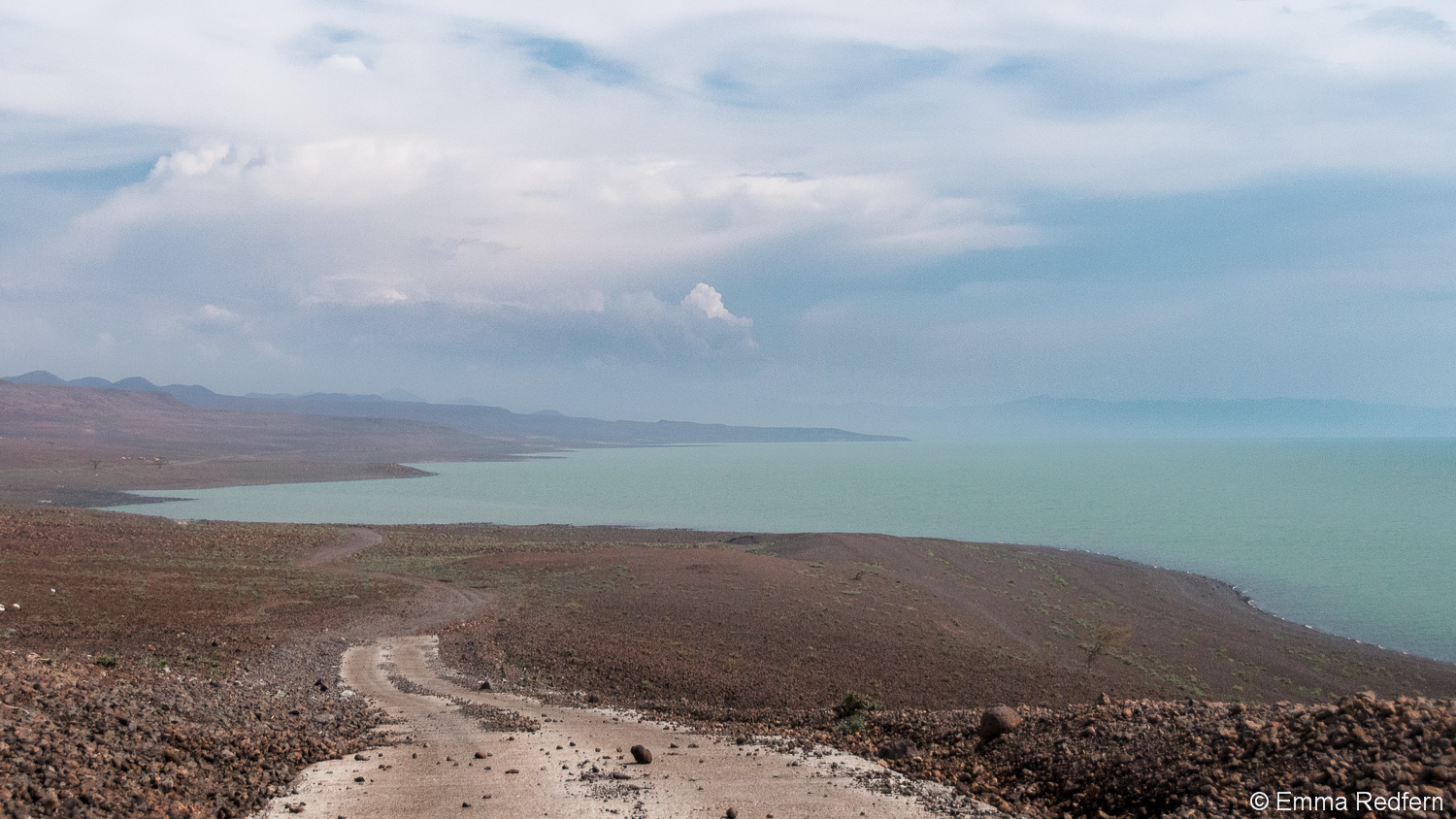 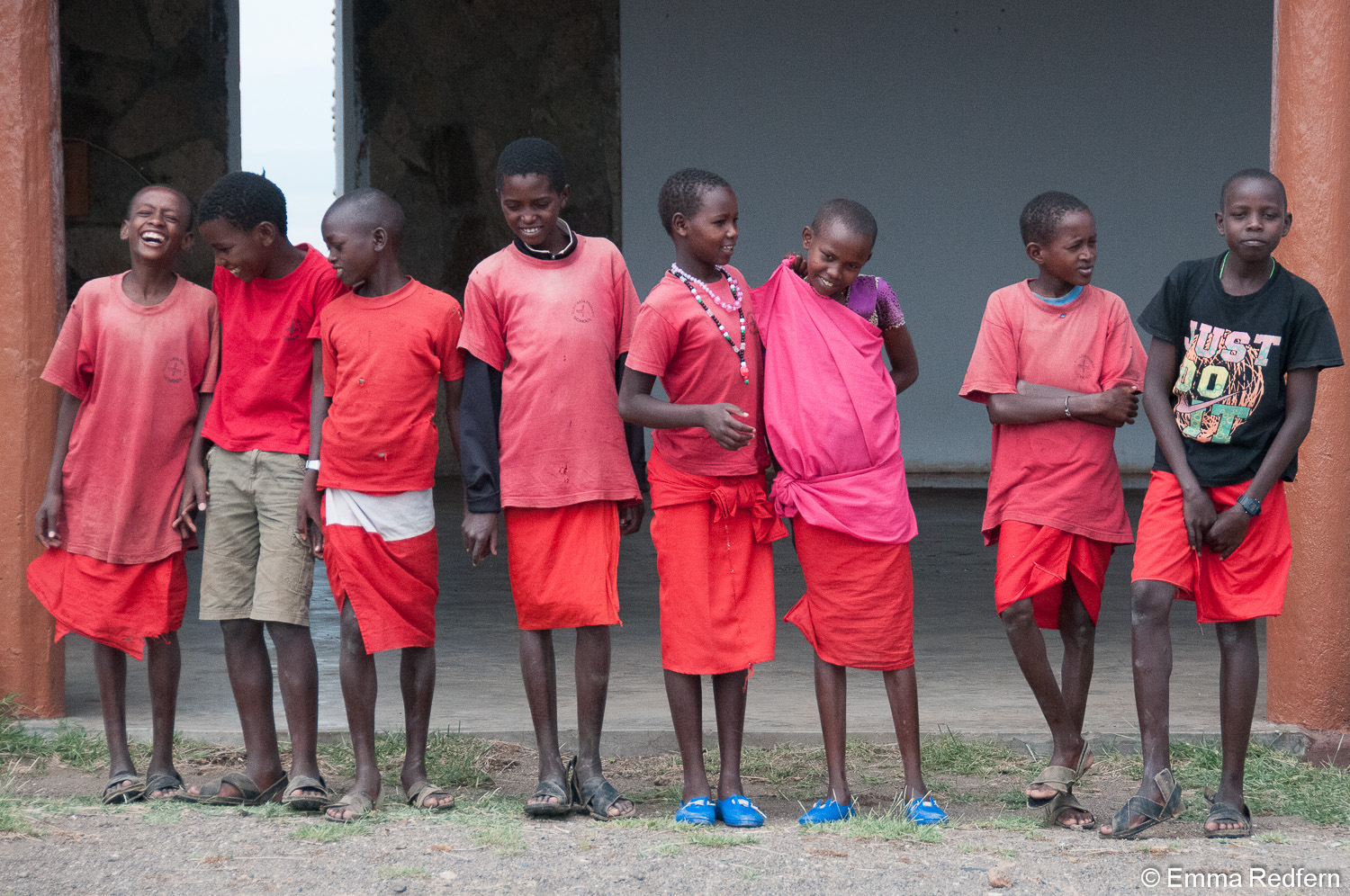 The Lions on tour

One Response to School trip to the worlds largest desert lake