It is three weeks since the last conflict related death in Isiolo. If you were to visit Isiolo town today you are likely to be told that the troubles are over, “Isiolo is peaceful now”. For some, and for the moment, this is true. However the residents of the worst hit areas, just a few km to the west of town, will tell you a different story. That is if you can find any. The majority of homes in Akadali, LMD, Game and Shambani areas remain empty. Some of the former residents have left for good, prepared to give up property rather than their lives. Others are staying with friends and relatives in safer areas hoping to return in time. A hardy few have returned to salvage what is left of their burnt or ransacked homes. The rest are in IDP camps.

Houses Being Burnt in Isiolo

One of the largest IDP camp is situated at Shambani Primary School. If you talk to the people there they will indicate with a sweep of an arm the large area of land still too dangerous to enter without an armed police escort. In the populated areas that boarder this ‘dangerous’ land you can only pass through the places where your own tribe live, if you try to pass through an area populated by the opposing tribe you will be attacked. All strangers are treated with the utmost suspicion. Gunshots are heard on an almost daily basis from the ‘no go’ areas though for the time being these shots seem to be intended as warnings or threats rather than an attack on life. If you ask residents of these troubled areas, regardless of their affiliation or tribe, if peace has come to Isiolo they will say, without hesitation, “no”. They will tell you that there may not be trouble today but that it is not over. 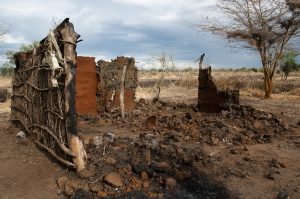 There are many reasons that can be given for the current conflict in Isiolo but logic and reason does not bring the outsider any closer to understanding the bitterness, sense of injustice and long held resentment of many people here. People who have lost family and friends to this conflict or whose right to the land they live on is challenged or disregarded.  There may be new reasons behind this current conflict but most of these groups have fought before for other reasons at other times. There is a strength of feeling here between certain groups that runs deep, it is easily ignited and it is very easy for others to manipulate it for their own ends.

Today those who have lost everything but have nowhere else to go, the internally displaced, are surviving day to day. Many of the children in these areas have not attended school since October last year. Yet there is surprisingly little help or support for them from the normal local and international aid sources. A few have been given plastic sheeting to make tents, some have been given mattresses and blankets. However as they have lost their livestock or are unable to return to their fields they have nothing to eat. There is no organised relief that I could discover. Food is being given out in other parts of the district for other reasons but most of those displaced by the fighting around Isiolo are receiving nothing. It makes me wonder if even aid and relief have become dragged into the local politics and divisions of the area.

More photographs from Isiolo can be found here