From somewhere in the dark there was a long blood curdling scream, followed by a fierce almost lion like roar. For a brief moment ghastly images formed in my mind as a rush of adrenalin surged through my body. But then my mind cleared and I realised we were listening to wild pigs fighting. We had journeyed into a remote area in the north of Kenya as part of our research into how people are coping with the long running drought. For hours we had driven through an area that had been abandoned more than a year ago. The people had moved west with their livestock, hoping to find some pasture for their animals, and all that was left were abandoned homesteads. However, with the people gone, the wildlife had moved back in; arid land specialists that manage drought conditions better than most, such as Gerenuk, Giraffe, Lesser Kudu and of course Elephants. 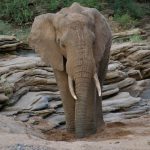 Elephant Drinking from a Sand Well

Elephants will travel great distances to the right kind of dry sandy riverbed where they can dig holes and extract water from deep in the sand. As we drove past one such dry river earlier in the day we saw an unusual sight. There was a huge amount of elephant dung covering a short stretch of river bed, so much that it made it look like an elephant farmyard. We realised that this must be one of the few places for miles and miles around that the elephants could come to drink. Kitonga is a passionate and experienced elephant watcher so, as it was getting late, we decided to make camp on the river bank right next to the elephant farm yard.

None of the animals came to dig for water till after dark despite the whole area being empty of people. The elephants didn’t start arriving until 9pm, which backed up our suspicion that the area has been a haunt of poachers in the recent past. The first elephants to come smelt our camp and they didn’t like it. There was trumpeting and a lot of disgruntled rumbling before they settled enough to dig into the sand for water. The peace didn’t last long, another family came and this obviously annoyed the first family. Competition for the best place to dig water holes resulted in an angry stand off between the two families. The screaming and trumpeting told us that one of the elephants was chasing others down the river away from the prime site. An elephant trumpeting in anger is an awe inspiring sound. The pattern continued into the night and as each new group arrived to drink competition with the current group would result in rumblings and trumpeting as priority was decided. 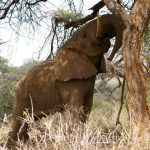 One group, after they had finished drinking, moved to browse around our tents. It sounded like trees were coming down all around us, though in most cases it was just branches. There was no moon and only the faint light of the stars to see by but at one point a large shape separated itself from the bushes not two metres from my tent. Elephants are large animals but when you are sitting on the ground, with only a sheet of nylon mesh between you and it, an elephant becomes enormous. After a few heart stopping moments the elephant tore at an overhead branch and moved on. When another came too close behind the tents Kitonga shone his torch at it. It was obviously very startled because we heard it crashing away through the bushes at quite a speed. At one point some hyenas came right up to the tents making the strange laughing calls they are famous for. This call lets others in the pack know that they have found food. Perhaps it was the smell of the sausages we’d had for supper, perhaps it was us, luckily they moved on. In time tiredness overcame the sounds of crashing bushes and elephant rumbling and I fell asleep, but even exhausted I was woken regularly by the fights that happened throughout the night. The screaming and bellowing of elephants fighting only a few metres away was just impossible to sleep through.

By dawn all was quiet again. The elephants had left for safer areas to browse amongst the dry bushes. As we drank tea we watched a troop of baboons come down to drink from the holes that the elephants had dug, before they too went off in search of food. Tired from our eventful night we broke camp and drove off to find out what had happened to the people who used to live here but had left in search of survival.