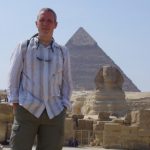 Jonny and the Sphinx

Today Jonny leaves Cairo to start the African leg of his cycling journey from Edinburgh to Isiolo. He had the opportunity to get to know Cairo while he waited 3 weeks for his Sudanese visa. “I think I must have been ‘profiled’” said Jonny “because I met a Dutch family who received their visa in just 3 days”. However he feels the rest has done him good and he is now ready to tackle the heat of the desert as he heads south through Eygpt and Sudan. “I think some of the toughest challenges of this stage of the journey will be in Ethiopia where there are a lot of really big hills” says Jonny.  Though of course he will have all those lovely descents to make up for it. He is particularly curious about the Blue Nile Gorge, over 1000m down, and then more than 1000m back up again! But at least it will all be on tarmac. Once he reaches the Kenyan border he will be tackling most of his final miles on one of the worst road surfaces known to man, the corrugated dirt road! The final stretch coming down through northern Kenya is also one of the most dangerous as bandits are unfortunately fairly common. However the DARE team will be meeting him at the Ethiopian border to provide security support and back up for the last push to Isiolo and a cold Tusker.