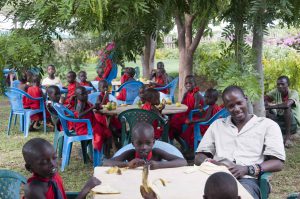 During her last visit to Kenya Margareta Kolarovska, long-time friend and supporter of DARE, took all the children and staff from Olng’arua School on an outing.

The day out started with a drive through Lewa Conservancy where many animals, including the rare white and black rhinos, were seen and was followed by a trip to Gaddisa in Isiolo town.

For many of the children it was their first visit to Isiolo, or any town for that matter, and the first time they had seen a tarmac road. The tarmac road and the cars and lorries especially impressed the young boys in the party.

At Gaddisa the group had lunch and sodas followed by an afternoon playing in the cool green grounds and on the swings, roundabout and other outdoor play equipment. 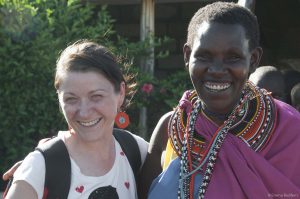 Margi and the Olng’arua School Cook

This outing has been the single biggest topic of conversation for some time now. Each child (and even some of the adults) recounting over and over the many things they saw and did on their big adventure.

So on behalf of everyone at the school I would like to say thank you to Margi for a great day out.