Music and Dance at Olng’arua School 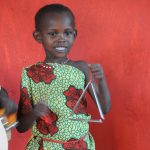 Craignish Primary School, in a little village on the west coast of Scotland, took the time to raise money for Oling’arua school. The students asked what the school needed and we said musical instruments. The children here have never seen such things let alone played with them.

The children from Craignish took our request, and the realities of a school in the bush of northern Kenya, very seriously. They carefully chose instruments that would be suitable for young children and would survive both them and the harsh environment.

At last the day came when everything and everyone was ready and the children had their first music and dance session in their newly painted classroom. I don’t know who was more delighted; the children, who at first had no idea what to do, their parents, who also had never seen or played with musical instruments before, or myself, supposed to be taking photographs but trying hard not to get swept up in the fun, noise and joy of it all.

The children quickly worked out how to make a lot of noise with their new instruments and it only took a little bit of encouragement from a hugely enthusiastic Kitonga to get them all dancing. The adults from the community were all wearing broad grins as they watched the kids engage in such unabashed fun. A far cry from normal school room activities in this country, long may the riot of experimental fun continue!